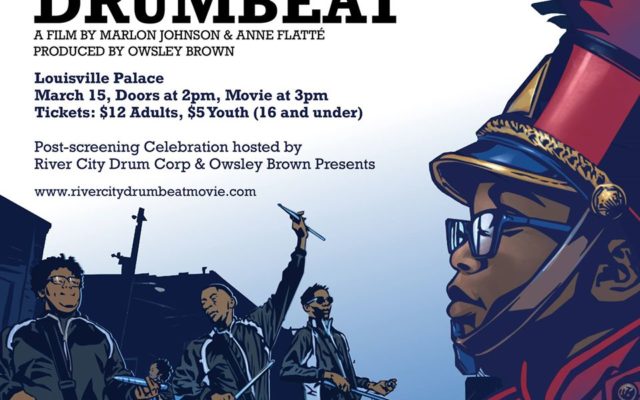 Flyover Film Festival is excited to announce the Kentucky Premiere of RIVER CITY DRUMBEAT at the Louisville Palace, Sunday March 15th at 3pm.

River City Drumbeat, the uplifting new feature documentary about Louisville’s River City Drum Corp, directed by Marlon Johnson and Anne Flatté and produced by Owsley Brown, will have its Kentucky premiere at the historic Louisville Palace on March 15. The film chronicles the story of Edward “Nardie” White, who has devoted his life to leading the River City Drum Corp (RCDC), an ensemble he cofounded with his wife, Zambia Nkrumah, in Louisville, Kentucky thirty years ago. Together they worked with youth in their West Louisville neighborhood to provide a path to empowerment by connecting them with the art and cultural traditions of their African ancestors.

“Our culture is going to be our savior,” Mr. White says in the film, “If we tap back into that culture you’ll find out that’s where the power is at.” As Mr. White trains his successor Albert to take over, high school seniors Imani and Jailen and pre-teen Emily navigate their own major life changes. The film follows this creative community of African-American mentors, parents, and youth making their way in the world using cultural and artistic resources in an environment where systemic forces raise barriers to the fulfillment of their dreams. This multigenerational story of music, love, and legacies set against the backdrop of the American South is both unblinking and inspiring. River City Drumbeat had its world premiere on November 12 at the DOC NYC film festival in New York.

Flyover Film Festival is a program of the Louisville Film Society.