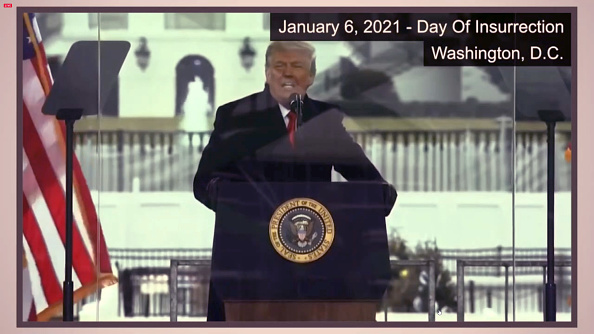 WASHINGTON, DC - FEBRUARY 13: In this screenshot taken from a congress.gov webcast, video evidence is presented on the fifth day of former President Donald Trump's second impeachment trial at the U.S. Capitol on February 13, 2021 in Washington, DC. House impeachment managers had argued that Trump was “singularly responsible” for the January 6th attack at the U.S. Capitol and he should be convicted and barred from ever holding public office again. (Photo by congress.gov via Getty Images)

Former President Donald J. Trump has been acquitted this past weekend in his 2nd impeachment trial. He was facing charges of inciting a riot at the U.S. Capitol on January 6th, 2021 with the purpose of disrupting the electoral vote before the U.S. Senate. The “peaceful protest” turned deadly and left 5 people dead as a result. Now that he has been acquitted of the “incitement of insurrection” on the U.S. Capitol, what’s next for the former president? There could be criminal and civil charges against the former president. Now that Trump is a private citizen, he is not protected by legal liability as when he was in office. Which means if a court would have to prove that Trump knew his words and actions would turn into a violent reaction from supporters. There are still possible charges regarding financial responsibilities, taxes and claims of insurance fraud? Only time, will reveal if charges are brought against our former President, but his legal woes are far from over.