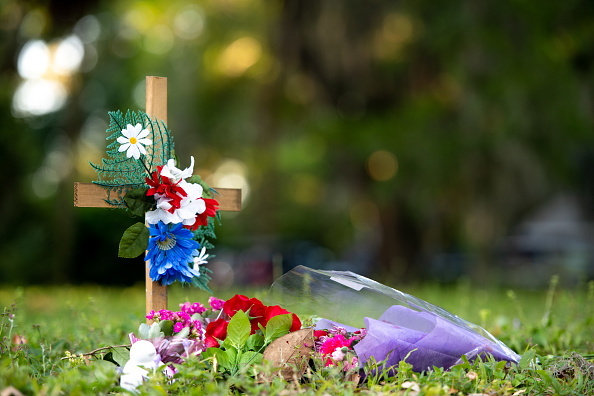 BRUNSWICK, GA - MAY 07: A cross with flowers sits near the intersection of Satilla Rd. and Holmes Rd. in the Satilla Shores neighborhood where Ahmaud Arbery was shot and killed May 7, 2020 in Brunswick, Georgia. Arbery was shot during a confrontation with an armed father and son on Feb. 23. (Photo by Sean Rayford/Getty Images)

The 2 white men in Georgia (Gregory & Travis McMichael) who shot and killed jogger Ahmaud Arbery are being charged with felony murder and aggravated assault! The viral video was released to the internet this week and caused outrage across the nation! The assault and murder happened on February 23rd in Brunswick, Georgia in a neighborhood called Satilla Shores. The father and son duo make claims that they were making a citizen’s arrest on someone who was making a string of burglaries in the neighborhood. Unfortunately, the situation turned out for the worse with Ahmaud being killed. Due to possible corruption, the McMichael’s weren’t arrested until the public outcry for justice until their case goes to court. Today Ahmaud would have turned 26 years old! R.I.P. (This picture is the site of the crime with a cross in remembrance of Ahmaud Arbery)