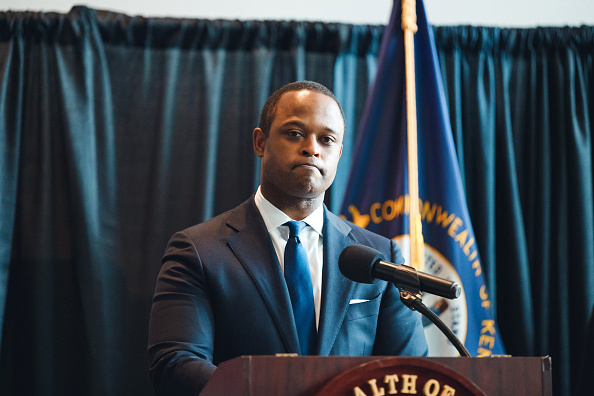 FRANKFORT, KY - SEPTEMBER 23: Kentucky Attorney General Daniel Cameron speaks during a press conference to announce a grand jury's decision to indict one of three Louisville Metro Police Department officers involved in the shooting death of Breonna Taylor on September 23, 2020 in Frankfort, Kentucky. Former Louisville Metro Police Officer Brett Hankison has been charged with wanton endangerment for shooting into neighboring apartments during the execution of a fatal raid on Taylor's apartment on March 13, 2020. (Photo by Jon Cherry/Getty Images)

The recordings that lead to only 1 of 3 officers being indicted in the Breonna Taylor case, have finally been released to the public, attorneys and family of Breonna Taylor! This comes 2 weeks after Brett Hankison was the only officer charged on 3 counts of wanton endangerment on a neighbors apartment next to Breonna Taylor’s, and not Breonna Taylor herself? Attorneys asked to hear what prosecutors presented to the grand jury, because there seems to be inconsistencies with the case. Over 15 hours of recorded audio has been released! The recordings were supposed to released days earlier, but the Kentucky Attorney general had to protect the names of the “secret grand jury” from being released before the recordings were made public. One juror says that they want to break their silence, but wants to make sure they are protected by law to do so in this case. As far as the biggest findings in the recordings…it looks like Kentucky Attorney General didn’t make any recommend charges against the officers, which is causing the controversy behind the charges. Cameron said in a statement on Friday, that “it is unusual for a court to require the release of the recordings.” Cameron’s office complied “so the truth can be heard!” Legal analysts are saying that this was strategic on Cameron’s part to not have his recommendations recorded.