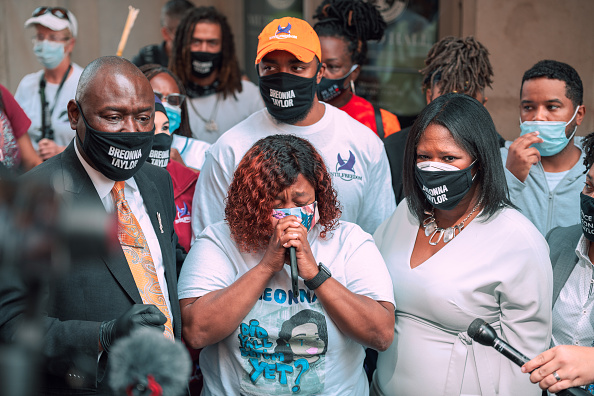 LOUISVILLE, KY - SEPTEMBER 15: Tamika Palmer, mother to the late Breonna Taylor, speaks after a press conference with attorney Ben Crump at City Hall on September 15, 2020 in Louisville, Kentucky. It was announced that the city will institute police reforms and pay $12 million to the family of Breonna Taylor, who was fatally shot by Louisville police officers during a no-knock raid at her apartment on March 13, 2020. (Photo by Jon Cherry/Getty Images)

Yesterday, Louisville’s Mayor Greg Fischer announced that the city came to an agreement with Breonna Taylor’s family and attorneys for a record $12 million settlement! This money is coming from several sources, one of them being the City of Louisville, Louisville’s general fund and insurance companies. This is the biggest settlement in Louisville civil suit! Attorney Benjamin Crump and family attorney Lonita Baker are seeking no less than 2nd degree manslaughter charges against the officers that are responsible for Breonna’s death! Typically, the criminal case is resolved before the civil suit, but once all the information from the grand jury is determined, Breonna’s legal team would have more leverage on the civil suit damages. The pursuit for justice isn’t over! Only 1 officer has been fired, and none have been charged! #unitedforjustice